(Toronto, ON) Tuesday, September 29 -- Today, VPN provider TunnelBear released a study, uncovering global perspectives on online censorship experiences of citizens in the United States of America, Canada, the United Kingdom, Australia, Russia, Norway and Sweden. The survey showed large segments of people in each country do not trust the integrity of information they find online, and many suspect censorship is at play.

Consumers believe they face internet censorship, with those in the USA feeling most impacted

Due to pandemic-induced stay-at-home orders and increasing political activism, online activity across the globe has reached an all-time high in 2020, with a report from DataReportal showing a 7% increase in internet users and Akamai revealing a 30% increase in global internet traffic. As more connections take place digitally, many people are cautious of the ways censorship may be impacting their ability to gather accurate, real-time information.

TunnelBear’s recent survey found that nearly half (45%) of respondents in the seven countries surveyed - do not trust the integrity of information they find online. In fact, two in five (44%) people globally report that they, or someone they know, have experienced internet censorship, with the highest rate coming from the USA (54%), while Sweden and Norway are close behind (53% each). 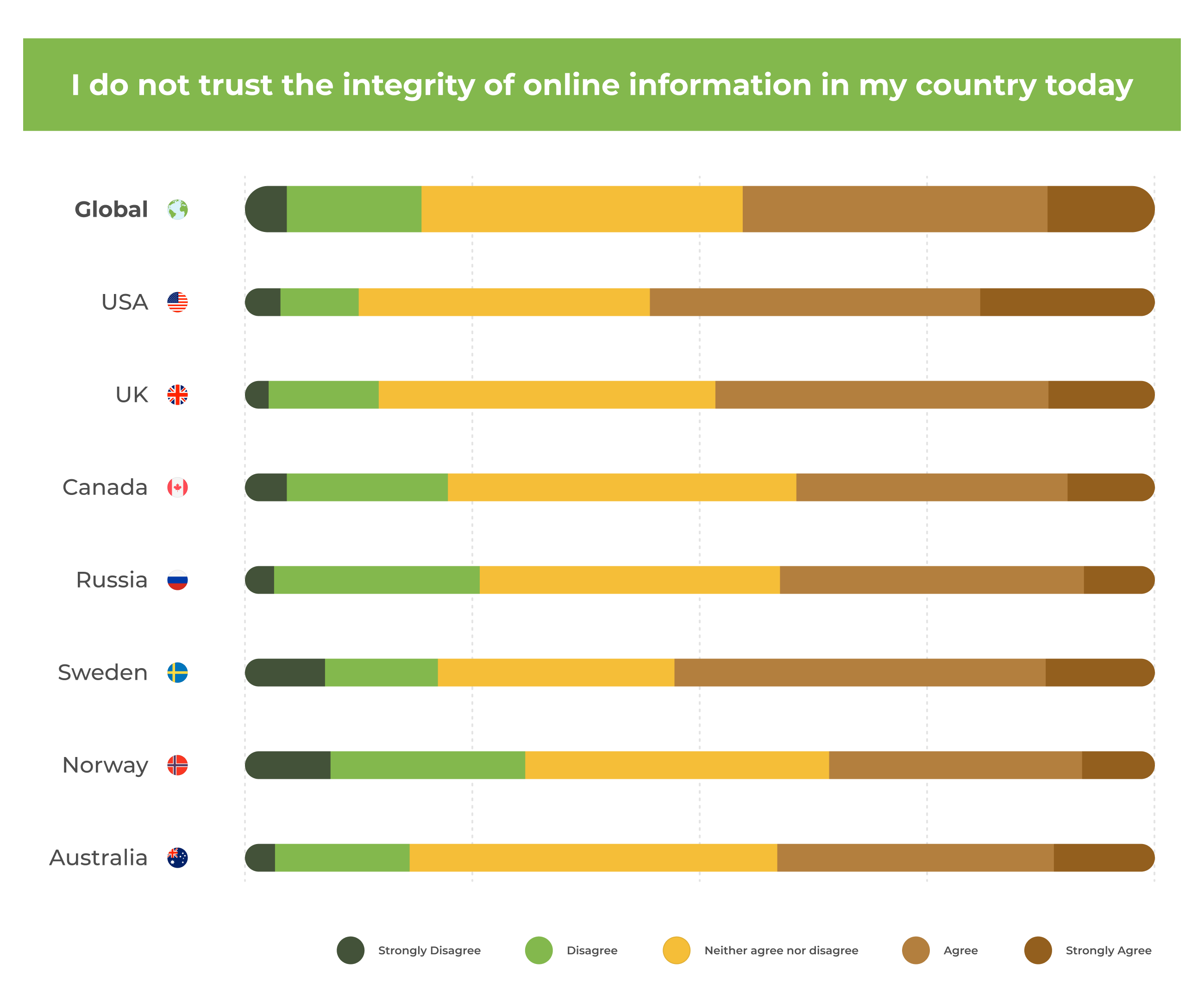 Globally, two-thirds (69%) of respondents believe online information accessed in their country might be censored, with over one-third (35%) reporting they believe a significant amount of news is censored in their country. That said, censorship appears to be less top of mind for users in the UK, Canada and Australia - as almost one-third (31%) of respondents in these countries say they have never considered if online information is censored.

Consumers are suspicious of political censorship

Censorship can take many different forms, impacting users in targeted ways. Consumers are divided in their opinions on the most prominent form experienced today. 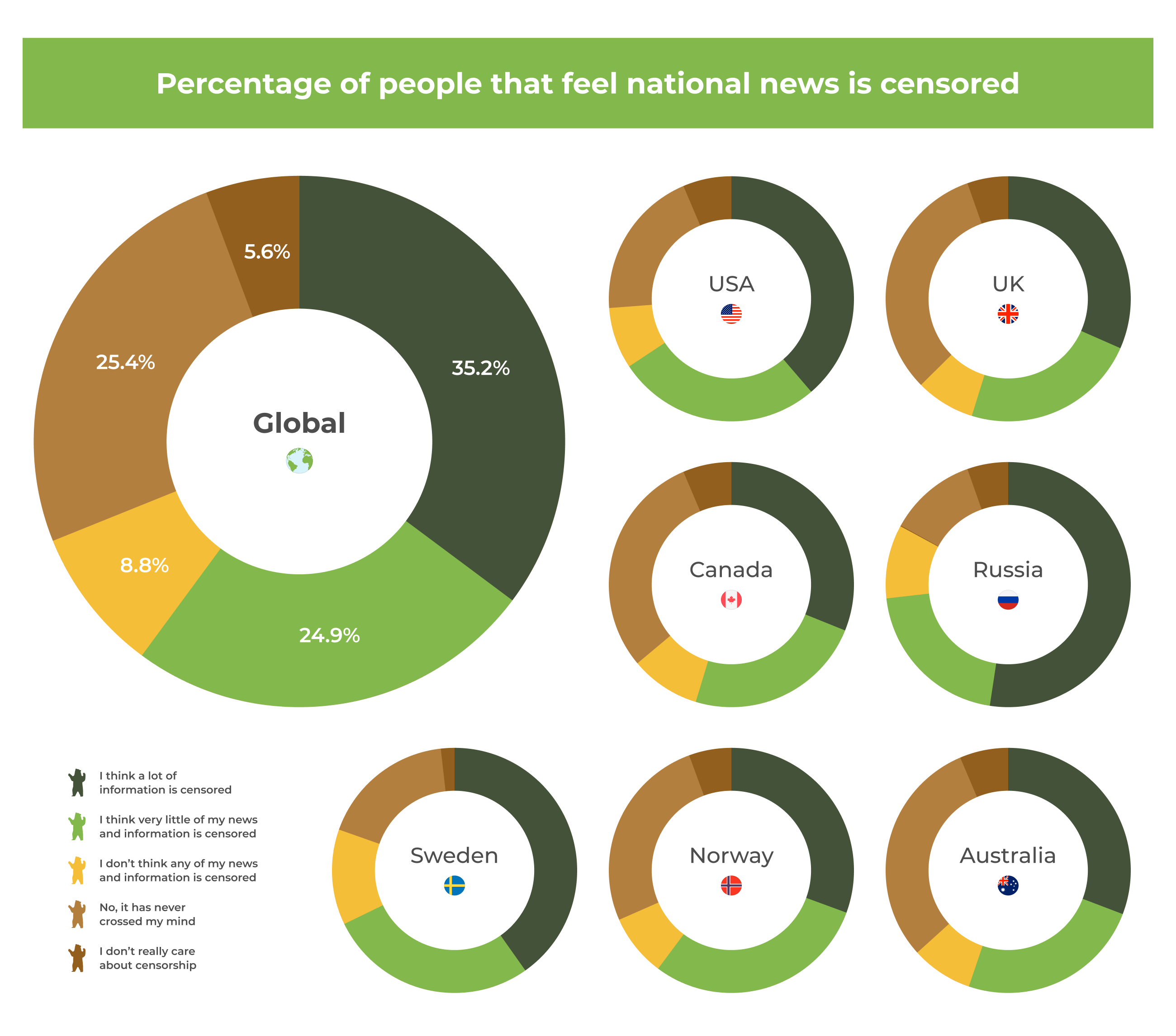 According to the survey, over one-third (39%) of respondents believe they face political censorship, as governments and political parties suppress content to avoid upheaval or embarrassment. This number jumps to nearly half (44%) in the USA.

As respondents become more cautious of potential censorship in their respective countries, nearly one-third (29%) reported that they would begin using a VPN if there was hard evidence of regulators censoring the internet. However, over one in four consumers (26%) are not familiar with the technology - and therefore, would be unlikely to use one.

“While consumers are increasingly aware of and wary about internet censorship, they also need to understand how to combat such intrusions on their freedom,” said Justin Watts, Head of Engineering at TunnelBear. “At TunnelBear, we are passionate advocates for a free and open internet. Through our latest technology and recent anti-censorship initiatives in countries like Iran and Venezuela, we intend to help everyone access the most accurate and updated information available.”

In countries such as Iran, where this type of censorship is known to be particularly prevalent, TunnelBear has launched an anti-censorship initiative that provides users with enough data to browse the web and view blocked content at no cost to them. TunnelBear also partners with NGOs and other open-internet activist groups to continue expanding its offerings to consumers who need these resources the most.

TunnelBear worked with 3Gem Global Research to conduct a survey in September of 2020. The survey polled 5,500 people between the ages of 18-65 in the United States of America, Canada, the United Kingdom, Australia, Russia, Norway and Sweden on the topic of internet censorship.